I did art today, but I can’t post it until tomorrow 🙁  I also worked up a concept for this week’s Illustration Friday and may make a first attempt at that challenge. I didn’t have a chance today.

So what am I going to post about tonight?

We are currently looking at revitalising our front garden, a large area full of Australian native plants (another hobby of mine)…and weeds. Several years ago I drew up a plan for what the work-in-progress would eventually look like. Can I find that map now? No. Why am I mentioning this? Because the map was drawn in one of my sketchbooks and I’ve been hunting through all of them trying to find it.

I may not have found the map, but I found a whole bunch of different things I forgot I had.

I don’t have many sketchbooks, about a handful, but each sketchbook spans a time in my life. I’m not talking journals or anything organised. All I have is prep sketches for larger pieces, half baked ideas, and scribbles.

Tonight while going through them, I discovered that I have a sketchbook from when I was in high school. I have several from when I was studying graphic design in college, I have snapshots of my creative life hidden away in these old spiral bound pads.

There’s the sketchbook that I bought while on my honeymoon in 2001. The one time I didn’t take my art equipment with me (because when I do, I never use it), I found myself so inspired with an idea I had to drop everything, buy a sketchbook, pencil, eraser, sharpener, and a small set of coloured pencils, and sit in the middle of an empty mall and scribble down the idea (We were in Kuranda, near Cairns, Queensland. If you want inspiration, go to the tropics, so much colour and life!) 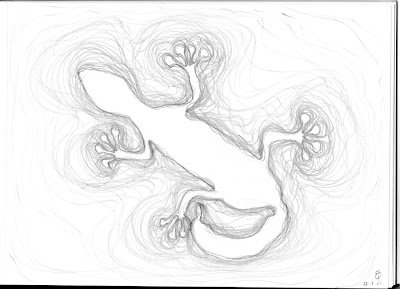 That is what I drew (one of of two ideas).

This is what it became when I got home. 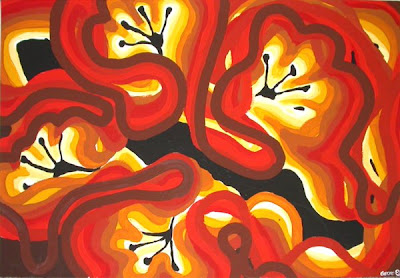 And I’ve wandered off topic…

One of the things I’ve come to realise in the last few weeks is that I have more artistic experience than I realised. I’ve been attempting things I never thought I could do competently and succeeding! And the array of different things I’ve been doing has woken me up to what I can do.

And those sketchbooks reminded me of some of the things I did in the past. Remember the mandala I created for the first time a few days ago? I didn’t lie when I said it was the first time I had done something like that, but I remember having a vaguely familiar feeling while drawing it. When I flipped through one of my oldest sketchbooks, I found this…

It’s from the mid nineties. I guess I forgot to remember that my final years of art in high school were spent studying calligraphy and illumination. Derrrr. Twenty years ago mandala design would have been right down my alley if I knew they existed. The skill is there, but apparently I’d forgotten I had it!

I also found this…(sorry about the shocking photography)

Both of the above designs were never developed into anything, but I really like them both. They have great possibilities with the things I know now.

This one sums up my art career up until a couple of months ago. 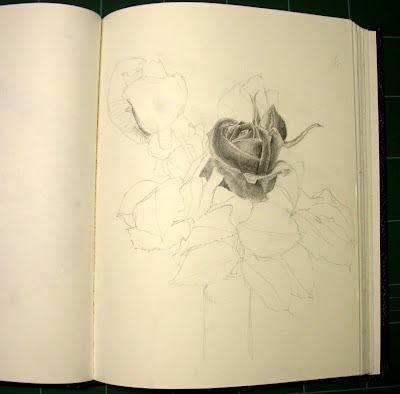 Great starter, not so good on the finishing.

Things are a little different now and I am finally producing work at a decent rate and exploring art as an artist should. And it is very much thanks to this blog and all you wonderfully supportive people out there. ::hugs all round::

I have a current sketchbook and I’m filling it with challenge answers, prepwork for finals, etc, just as I have always done, if at a faster rate, so down the track I’ll probably stumble across it again and gaze at a piece of me from the past.

And they’ll be good memories.