After spending my ten minutes drawing my stag beetle and then dashing off to attend to Izzy, I was left with a feeling of incompleteness. This feeling only intensified when I started looking at what the other participants in the workshop had come up with according to the same instructions.

I was a little flabbergasted. There was colourful completed artwork galore. I had to reread the instructions to see if I had done it correctly, which I think I did, and I had to come to the conclusion that this was the Art of Silliness and I should relax my teachers pet attitude of trying to get everything right. Relax, Nutty!

Of course, amongst all these wonderful pieces, my lousy little ten minute sketch, complete with wonky perspective, just didn’t live up to the score. And to admit it, I liked the idea of the stag beetle and had the urge to scribble down some cartoony versions.

So with Izzy asleep on the couch, and despite the fact there are about a zillion things I should be doing with such a precious moment, I knelt down at the coffee table and drew for a little while.

Note: these are pencil works designed to be traced and penned with black ink, so they are pretty rough and are not finished works. As to whether I’ll eventually pen them…unsure, time is a problem as always. 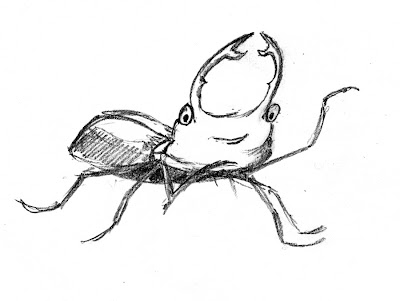 I don’t know if female stag beetles have the horns and I can’t be bothered to look it up, but this one spoke of girly as I was drawing it so it evolved that way. 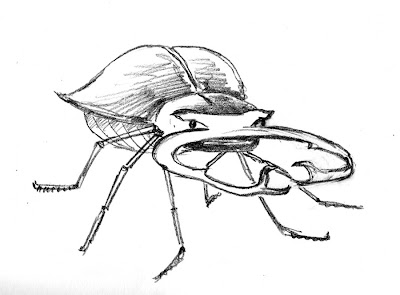 This guy was supposed to end up a mean machine, but is a touch too mild mannered. The structure of the beetle speaks to me of hot cars and racing flames. I may expand on that idea in the future. 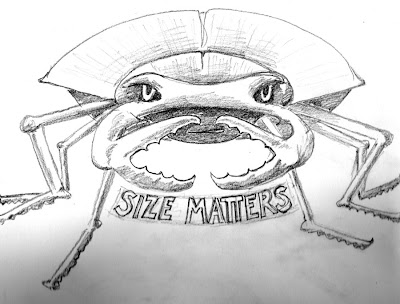 This one is achieved some of the ‘mean’ the former one didn’t, even though he is essentially the same bug. The typography needs fixing (I’d either computer it, or fix it during the pen work) and please ignore the dark shadow from the scan.
That’s all I’ve done so far. The magic of this whole thing is that I would never have ever considered drawing a stag beetle if it wasn’t for the Silly Assignment. Already my tiny monetary investment in the workshop is paying off. Down the track I could possibly work this design into something I could use. And stag beetles? Not something you see everyday, so they have lots of possibilities.
I’m enjoying myself!
Nutty
(still smothered in a list of six zillion things I need to do)