As some of you know, I’ve been playing around with my soft pastels since I started this blog back in June. I had great fun with them during the Creative Color Challenge, and although I’ve been playing with my pencils lately with the Silly Workshop, they have been in the back of my mind most of the time – I simply adore playing with colour.

So yesterday I got them out with the intention of playing with an idea I’ve had in my head for some time now – lichen painting.  I fell in love with some of the lichen piccies I stumbled across one night and was all enthused about the colour possibilities. The idea didn’t quite reach realisation this time around and I will have to go back and have another go at it, but I did produce a piece of artwork.

It is only a scribble, really born from some of the spirit of the Silly Workshop. I drew a shape in the middle of the paper and went from there. It never did reach ‘lichenhood’, but became something else, more of a agate pattern, if a little too excited. (It should also be noted that my historic camera is not a fan of rendering reds correctly.) 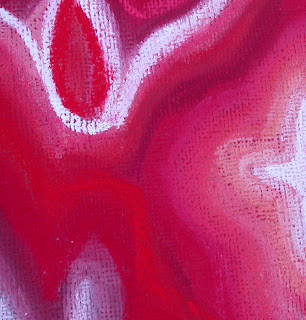 What I did do with this piece was experiment. I’m fairly new to pastels and all the works you have seen on this blog have been my learning pieces. I’ve been collecting Rembrandt brand pastels for a few years (well, for a short period before I had children…then I had children and everything came to an abrupt and screeching halt) and I considered them, while not the top of the range, a really decent brand of pastel. Certainly pricey enough to be so. I’ve loved working with them, but halfway through the Creative Color Challenge we were assigned Raspberry Red. Great, I love the colour, but my Rembrandt pastels were not up to scratch. Just that colour, the sticks were too hard and would not deliver pigment onto the paper evenly and would scratch and make a mess of the work (very frustrating!). So in order to finish that Red challenge I was faced with finding another brand of pastel that would do what I needed it to do. 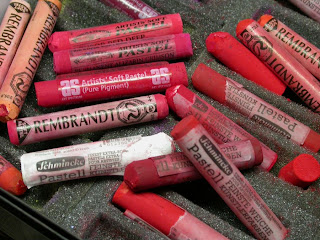 I bought Schmincke, Windsor and Newton and Art Spectrum. Schmincke, I knew was going to be good. The price alone told me enough, they are, in my books, really expensive at A$6.80 a stick (Rembrandt are around A$4.50). Windsor and Newton have ceased production of pastels, so the art shop was selling them off cheap. Great for my pocket, not so good for long term collection. Art Spectrum are a cheaper brand, so I was a little wary of them, but bought a couple anyway. I finished off ‘Blood Lily‘ with the Schmincke pastels and thoroughly fell in love with them (feel sorry for my bank account).

But today I really went to work on them. Schmincke, of course, won hands down, and I have decided to switch my collecting focus to that brand. The Rembrandt pastels are harder and can be used for basework, but the Schmincke pastels rule for putting in highlights and layering that extra bit of colour on top.

As for the other two brands…Windsor and Newton are almost level in quality with Rembrandt and were quite okay to use, but I found the Art Spectrum sticks to be much harder. If I was using a single brand for a painting, and I had the right support, it probably wouldn’t matter, but trying to layer a hard pastel on top of a soft one? Forget it (and I would only try because I needed a certain shade I didn’t have in the softer stick).

So I’m doomed to spend lots of money collecting Schmincke now. I would sigh, but I love buying art materials 😀

Another thing about this painting is that I started it upside down. Again some Carla Sonheim influence. It wasn’t working one way up half way through, so I turned it upside down and worked it that way. 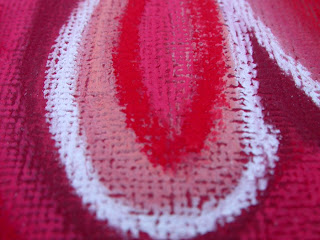 Oh, and I also tried an different support. I discovered that ‘canvas paper’ seems to only be a type of textured paper, and that texture is very similar to the texture on the many coloured sheets of card I bought early this year when I was playing around with scrapbooking. Enter a new way to play!  Firework Agate was drawn on red textured card, a first for me as I usually draw on black Canson paper. It worked okay. I don’t think it can take as much pastel as the paper can, but it was fun to play with and comes in a rainbow of colours, is acid free, and cheaper than other supports.  Something new to play with.