Remember this from yesterday? One of my one centimetre paintings. Well, they were designed to be inspiration points, so since I had time to paint today I took this one and turned it into this:

I finally got out my oil pastels to play. I laid down the background and then etched in the wobbly doodle with an unused nail file. I neglected to measure for squareness.

I could have left it there, but I was unhappy with the level of contrast and was game to experiment more. I had no idea where I was going and it was rather scary to do what I did next.

My first true mixed media attempt. And it failed miserably. I was attempting to etch in the doodle lines darker. It worked on a test, but I think I had the paint too thick on the actual piece and when I scraped it off…well, it was okay, but definitely not what I was looking for.

Now at this stage in the past, I probably would have dropped it and stormed off, considering it a failure. But there is one thing that some of tou have taught me in these past few months…never give up. If it isn’t working, keep working until it does. The beauty of mixed media is that you can layer upon layer upon layer.

But I was stuck for inspiration. What I had was a multi-green piece of paper with blue splotches all over it. What do I do? Time was a factor, so seeing that it needed an object focus, I reverted to an old painting favourite and drew from my brain. I was quite happy with what it turned out to be.

If you look carefully, you can see the blotchy background underneath. Did I need to do all that work beforehand? Maybe. In any case, I’ve now learnt a bunch of new things and have a new little painting to show for my efforts.

And where was Izzy during this? Beside me 😀 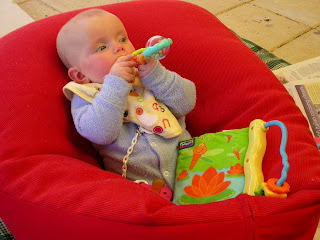