Our first week  and our first exercise. How did everyone do? I know my biggest challenge was actually getting anything done. There was no bed in my catdom, but there was kitchen table, couch, and coffee table.

I was going to post this post last night, but decided to leave it to Friday night (I’m in Australia, in most people’s futures ::waves to NZ who are in my future, along with the Aussie east coast::). Upon reflection, I think I will stick to the original plan of posting my Thursday night for the results and issuing the next challenge on Fridays.

But anyway, I digress. How did you all do? I’ve seen two wonderful results already, both Kristin Dudish and White Violet Art were on the ball and had me oggling at their work earlier today. Great stuff, guys.

As for me, I didn’t manage to draw all thirty cats. I think it was a combo of my complete inability to just scribble (I’m working on it!) and the two time eating children who live in my house. I will admit to not reading the instructions properly and using pencil instead of pen to draw most of my cats, and I forgot to try to use my non-dominant hand. So basically I just drew approximately 13 cartoon cats.

What I did do is fall into my old habit of working the idea. I needed to draw cats, but I have this thing where I can’t just draw a cat, I have to have some quirk in it to make it worth drawing. I think it is a left over from graphic design school where one of the best ways to find a good logo/advertsing concept was to do exactly that and draw until you find an idea. Not quite what the Lab had in mind, but I did produce some bits and pieces that could lead on to better works, so I’m happy for the most part. 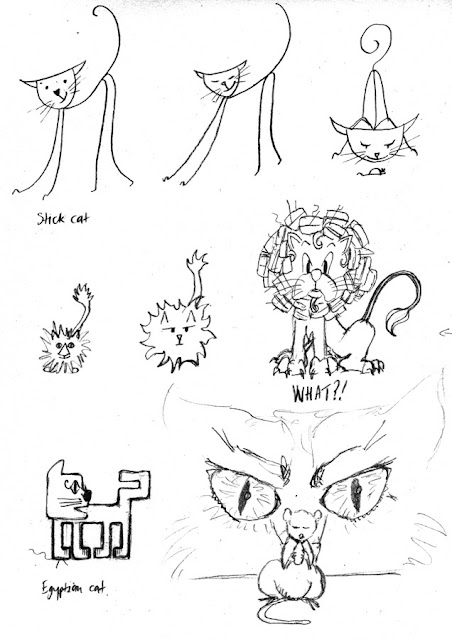 Here we have ‘Stick Cat’, my first idea. He’s a character that is going to launch my career in t-shirts ::tongue in cheek:: He was followed by ‘Fluff Cat’, but he resembled washing machine lint just a little to much, so he got scrapped. ‘Lion with mane in rollers’ turned out good, I was really happy with him and may take him to the next level. I don’t know where ‘Egyptian Cat’ came from, but he was fun. ‘Menacing Cat’ never really got off the ground because I was feeling a bit too lazy to draw in his detail. 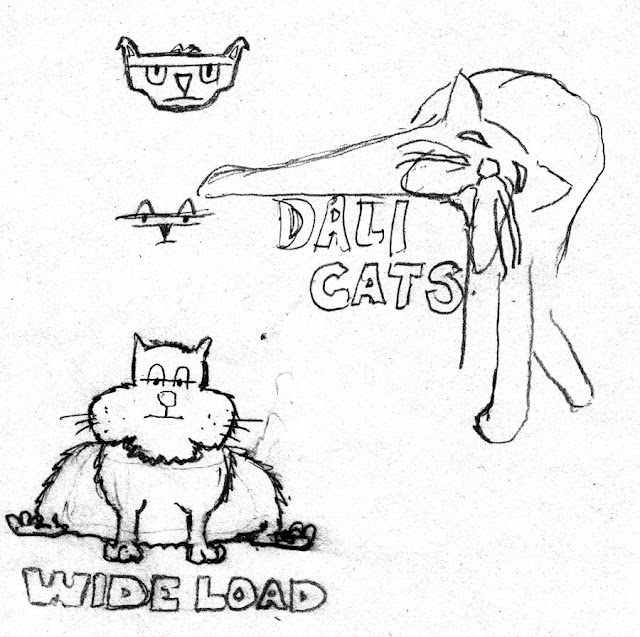 ‘Dali Cats’ had so much potential. I could have cats naturally floppy like Dali’s floppy clocks in all sorts of positions. Only one got very basically drawn, and I’m sure the concept has been explored before, it feels like my brain is regurgitating something I’ve seen in the far past. ‘Wide Load’ is in honour of my Hubby’s cat he had as a kid – big, fat, and owned his territory by sitting on anyone who got in the way. He also had the original name of ‘Puddy’. Fortunately I was around to help name our children 😀 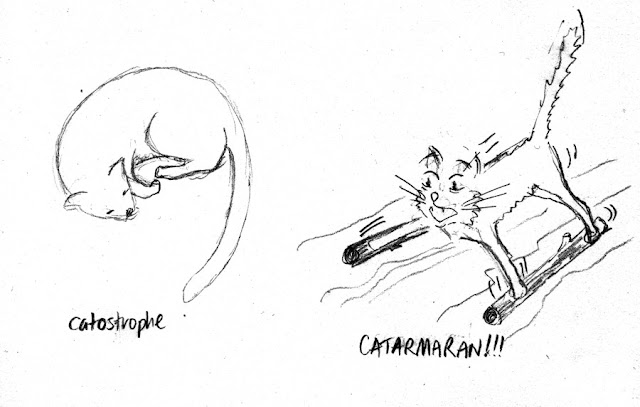 ‘Castostrophe’ was Hubby’s idea. I also thought of creating an entire alphabet out of cats, hey, that would be 26 of the 30 cats needed. Never got there, and it has probably already been done by someone anyway. ‘Catamaran’ was the first ‘word concept’ sketch I did (Hubby discovered ‘Catostrophe’ shortly after) and is proof I’m positively evil.

All of the above were done in pencil, so really I managed to cheat without meaning too.  Symptom of me leaving the book out by the computer and not in the lounge where I was working. I did do some reeeeally quick note sketches of ideas in my idea notepad (a place to stash inspiration when I’m otherwise occupied). I dare you to be able to read my horrific handwriting – there were a bunch of ideas that never made it to the sketchbook. 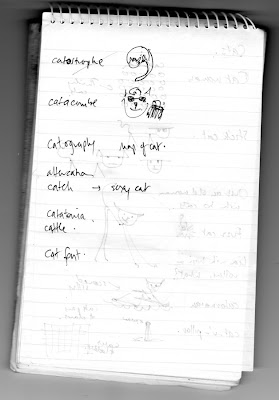 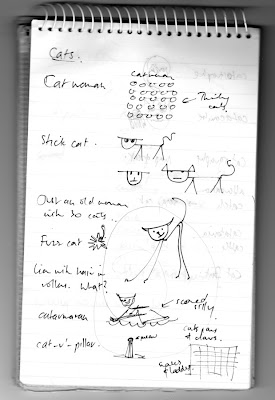 There was one cat that I did do in pen all by itself. I’ve found myself really attracted to the zentangle/doodle/mandala type art that I’m continually seeing about, so I got brave and threw off my pre-conceived art and drew a doodle cat. (No initial sketch, just pen starting from the top and drawing down.) 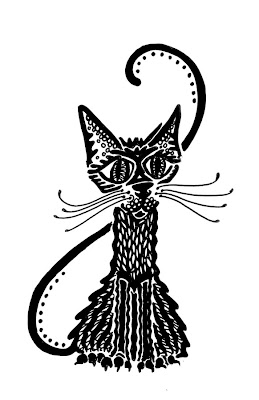 He’s a bit wonky, but I like him and intend to try doodling some more in the future.

So how did you all do? I wanna see stuff! Link here in the comments and load up your stuff to the Flickr group. Did you enjoy it?

Nutty
(who had fun)