Several years ago hubby and I went on holiday to Port Lincoln. On one of the days we were there, we went to Lincoln National Park. On that particular day the weather turned a little wintry. It was Spring and Port Lincoln sits out on the very end of a southern peninsula, cutting into the Southern Ocean. It is pretty predictable that the weather is going to be pretty unpredictable and squawly from time to time. 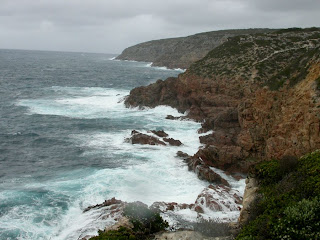 We only had three days for our holiday and Port Lincoln is about 6-7 hours drive from Adelaide, so we ignored the weather and went out anyway.

It was an experience.

At one point I remember clinging to a 45 degree slope in spitting rain, howling wind with a churning ocean a misstep away from intimacy. Why was I there?  I wanted to take a picture of a bright blue beetle I had found. 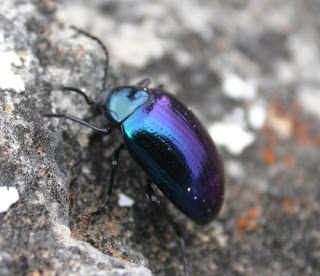 The cloudy day cast the ocean in grey rather than the crystal blue-green the open sea usually is, but it also gave me something  I expected, but, in the same vein, had forgotten.

We found ourselves at the top of a cliff. I left the car in the carpark and hubby along with it, he’d had enough of the freezing wind. I, on the other hand, made it to the cliff edge, camera in hand. It was raining, not heavily, but enough to hamper and the wind was tearing off the ocean far below. Off in the distance the sun was breaking through the rain, casting the sea in patches of silver. 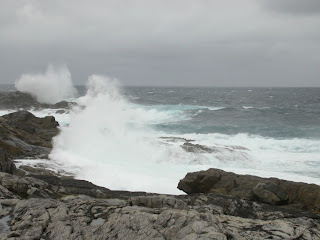 I was rugged up in my coat, the wind whipping at it and my face was freezing off, but I didn’t care. I love standing like that. The ocean at my feet, the wind in my hair, the elements filling my ears with sound. It’s exhilarating. It’s like you’re part of the world around you and that world is reaching out to touch you with gossamer fingers…or in that particular case, whipping, howling gusts of gale 😀

Eventually, I dragged hubby out of the car. He has a much more basic interpretation of such events….it’s bloody freezing. But I dragged him down the coast a little to take pictures of islands off shore and jagged rocks and angry ocean. The sun continued to try and break through, two abrupt rocky outcrops appeared through the misting rain in the distance and I desperately attempted to catch the moment the sun silvered the water before them (failed miserably) and had to settle for following the clouds as they tracked across the sky. 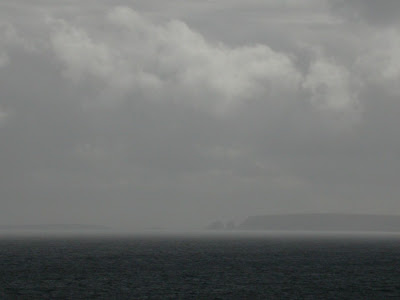 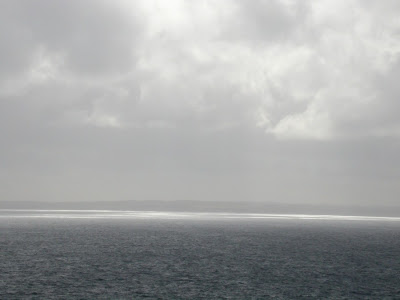 Hubby eventually dragged me back to the car, but as we drove off we passed some sandhills, almost orange in the wet conditions. Dry and bent trees with now blue sun-drenched ocean in the distance. The car stopped and the camera danced across the sand dunes (again failing miserably to get that perfect shot ::shrug::). 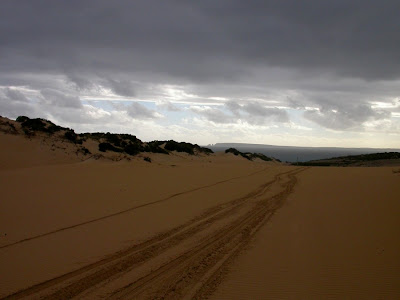 But I’ll always remember those moments. The wind. The rain. The grit of the sand dune beneath my feet. The saltspray drying on my face, skin chilled to ice. The sun peeking through the clouds. The roar of the ocean. It’s times like these that I feel I can be truly me. Be what I was meant to be. Even if that was a vague oneday wannabe artist/poet who simply can’t find the words.

I love the wind in my hair.

I’ve since decided to travel more in winter. The light is better for photography and the ever changing weather brings some beautiful chances for pictures.

Nutty
(blowing in the wind)