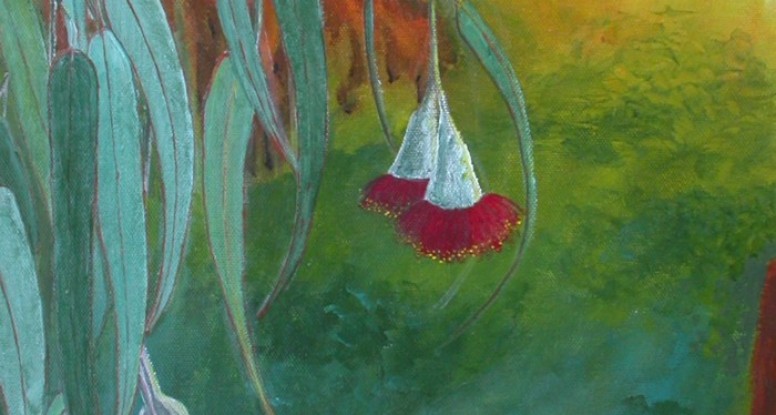 Okay, so a skip from Week 5 to Week 14 is pretty lame on my part, but I’m blaming it on stress and starting up again as if it never happened ::insert cheeky grin here::

So here we are at Week 14. The piece I have to show this week is not complete, but it is very close to being finished. I worked like crazy yesterday in the attempt to finish, but failed miserably and I’d rather submit it not quite complete and complete it calmly in the next day or two, rather than destroy it by crazily attempting to finish it in the early hours of the morning.

I have been attending an art class for the last eight weeks and this piece was an assignment. We’ve been learning all about mixing colours and the challenge this time was to use only two secondary colours and paint some leaves. We were only allowed the four colours used to mix those two secondary colours from our basic palettes, plus black and white. I chose green and orange, because let’s face it, if you have leaves, these are the best colours to work with, especially since I chose Australian native gum leaves to paint. Green and orange does sound kind of restrictive unless you consider that within those two colours we have access to their entire spectrum, plus their tints (add white) and shades (add black). So with a palette of Cadmium Red, Alizarin Crimson, Lemon Yellow, Cadmium Yellow, Cerulean Blue, Ultramarine Blue, Titanium White and Carbon Black, with no purples/violets allowed, this is what I came up with…

Now, remember that it is a WIP, I still need to make final corrections on everything, plus add depth to the bark in the foreground and fix the gumnuts on the left (yes, Gumnut Inspired painted gumnuts…I think this is a first :D).

This was seriously a case of the painting painted itself. Somehow I ended up painting a landscape (which is really exciting, because it is my first :D) which wasn’t part of the brief, but I needed a backdrop and the landscape just happened (it doesn’t exist anywhere, I just made it up :D). It is rather appropriate really since the gum leaves are those of the Gungurru, Eucalyptus caesia, which lives in granite outcrops in Western Australia (I will neglect to mention here that my cliffs in this picture do appear kind of sandstone rather than granite, but pfft! :D). I also cheated just a smidgen. There is no purple in this painting, but there are a couple of pure dobs of primary colour – in the flowers is some stunning pure Alizarin Crimson and I think the sun has a lot of Lemon Yellow that hasn’t been mixed with any blue, but considering how happy I am with the results so far…I don’t think I care 😀

So where have I been for the last nine weeks? Well, February got eaten by work and birthdays, my fortieth (yes, I am now officially in my forties, woohoo, bring on the art :D) and my eldest daughter’s fifth (another big one which required a party and kindy friend invites…I was terrified, but fortunately I have a great family who all helped me out). Towards the end of February we went away for ten days to a wonderful beachhouse, where I intended to do art, but mostly collapsed in exhaustion and did nothing…I think I was a little worn out. I did start a couple of things, but nothing was finished while I was away. However there is a big painting planned related to that holiday which will lead on a little from this landscape painting.

We got back early March and there was a brief bit of arty activity as I had homework from my art class to complete. This was the piece prior to this one (the leaves are overdue, I got sick in the middle of March and everything went down again). The challenge that time was to use only one secondary colour and create a pattern. So here is my Piece a Week 12, I was just too lazy (and sick at the time) to post it. Believe it or not, this is part of my sealife series (you know, the squids) even though it is more abstract. I call it Sponge Inspired simply because the pattern was derived from a piccy of a local sponge I saw in a book. Since that sponge was green and three dimensional and this is purple there is no resemblance, but that is where the inspiration came from. There is also another piece in progress similar, but larger than this, in different colours.

There was one other painting completed during my absence, but it was only an exercise for class. And here it is sitting on my brand new portable easel I bought with birthday money from the wonderful people at my work (I loooove my new portable easel :D). This piece, exercise only that it be, would have been my Piece a Week  8, but I was too busy/crazy to post it at the time.

So I’ve really only missed 7 weeks (ugh). I wonder if it is possible to catch that up during the year (that and the other slumps I’m likely to have along the way :D).

But to end on a positive note…I am REALLY excited about the landscape that happened in my Gungurru painting. It’s not technically sound, but I like it anyway and there is promise of new work in that direction 😀 Here be a shot of the landscape before I painted the leaves over the top (and yes, that was scary hard). See all my Pieces a Week!