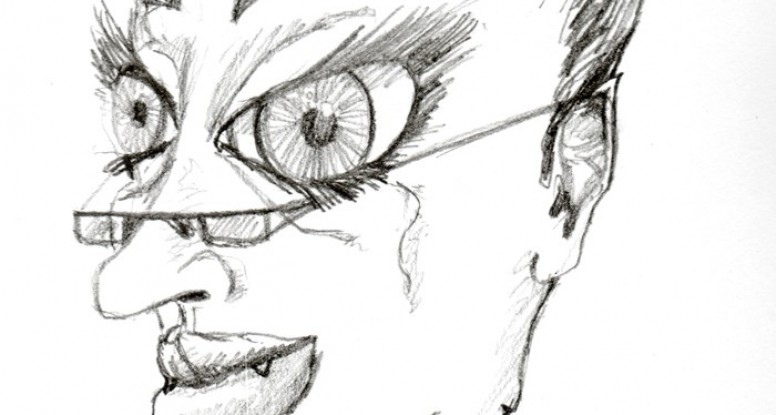 Well, my effort for my first 29 Faces challenge ended up with eight faces. And the last four of them, in other words, half of them, were done in the last few days. How slack is that? In my own defence I think I was taking some downtime after the big effort in April with the Blogging A to Z Challenge which I completed to my ultimate satisfaction.

So here are half my entries for this challenge. Things went a little wonky. I was sick over the weekend on several fronts, so I’m claiming illness was the catalyst for these slightly crazy drawings.

First up came this… I just sat down and drew and as I drew she got uglier and uglier and soon that ugly was doing its best to camouflage the fact that my perspective skills suck big time and it began claiming that the wonky eye is just a natural deformity for a goblin librarian.

My eldest daughter thought my goblin librarian was great and it quickly prompted several drawings by said daughter featuring fangs.  She ended up sitting next to me at the table and mother and daughter were drawing together quite happily. Of course, then I had to take it one step further…::grin:: Did anyone say that the faces had to be human? 😀 This little character, somewhat resembling a 1980’s ‘Gremlins’ reject, illustrates yet another of the difficulties in drawing faces – getting the features symmetrical – something often not easy. Ugly to the rescue again! Let’s just say he’s meant to be that way ::grin::

Eldest daughter also liked this Goblin and more drawing ensued. I needed a new topic so I asked her what I should draw next.

A clown – and I think out of all the three, he’s the most scary. I think I’ve read Stephen King’s ‘It’ one too many times.

Eldest daughter loved this one too, but it was her bedtime so the drawing ended there. I could have kept going after she had gone to bed, but it didn’t seem as much fun without her, so the next drawing didn’t get done until the following night.

This one I’m blaming on my sister. It’s in her little sketchbook. She often plays art with my eldest daughter and earlier that night the two of them had been playing ‘Mr Squiggle’…which is a story in itself.

For those of you who didn’t grow up in Australia between 1959 and 1999, ‘Mr Squiggle’ was Australia’s longest running children’s program…and I loved it. Mr Squiggle was a man (puppet/marionette) from the moon who came down in a rocket and drew pictures using squiggles sent in by children. He would basically create a drawing by connecting lines that were already drawn on the page.

You can find a video sample here on YouTube – http://youtu.be/7ks797n8B9g and here is the Wikipedia entry for the show. It ran for over 50 years and brought up generations of children.

Later on that night when the kids had gone to bed, she drew me a squiggle and demanded that I create a drawing out of it. This is what I came up with.

Sis gave me the shape of the eyes, the pupils and the three wrinkles on her forehead and I dementedly drew the rest while watching ‘Ironman’ for the zillionth time this week (I’m currently nuts on ‘Ironman’ thanks to seeing the new Avengers movie…it has been eating into my art time).

So there you have it, 8 out of 29, but all fun and worth every minute, despite the craziness of the last few.

Now on to next month’s challenges.